Hello, I'm Dwight Norris of fishingatwork.com and today we're gonna talk about my fishing on vacation at the Jupiter Inlet in Jupiter, Florida. If you look at the screen video you will see that

It's one of the main corridors that people in Jupiter, Florida will take their boats out from all the areas where they store them. It is full of restaurants and high class places.

The nominal speed and having to go over bridges that lift up. That usually happens every hour so when you see the lights you should make a U-turn and hit the next bridge or go buy some ice cream!

So most of them are really in this area. The river moves quickly here and I was fishing in this place call to Dubois Park. it's French!

The French went down to Florida looking for the what we call the "Fountain of Youth" to live forever. I think they only found Lake Okeechobee with a whole lot alligators that does not bring life.

The two main areas you can enter this park is Doubois Road. Now you can set up any fishing gear along the shoreline. All the fish are actually are pretty close to the rocks.

I'm not sure how to describe the speed of the water when there is an outflow or inflow.

I want to cover area, but there's lots of large rocks here and there covered in barnacles. They're odd shaped rocks to make the inlet not fall in on itself.

You may find that your weight will get caught in the rocks. Sometimes you can get out, but most times you can't. then the worst part is once you get hung you look down and you'll see fish going by! 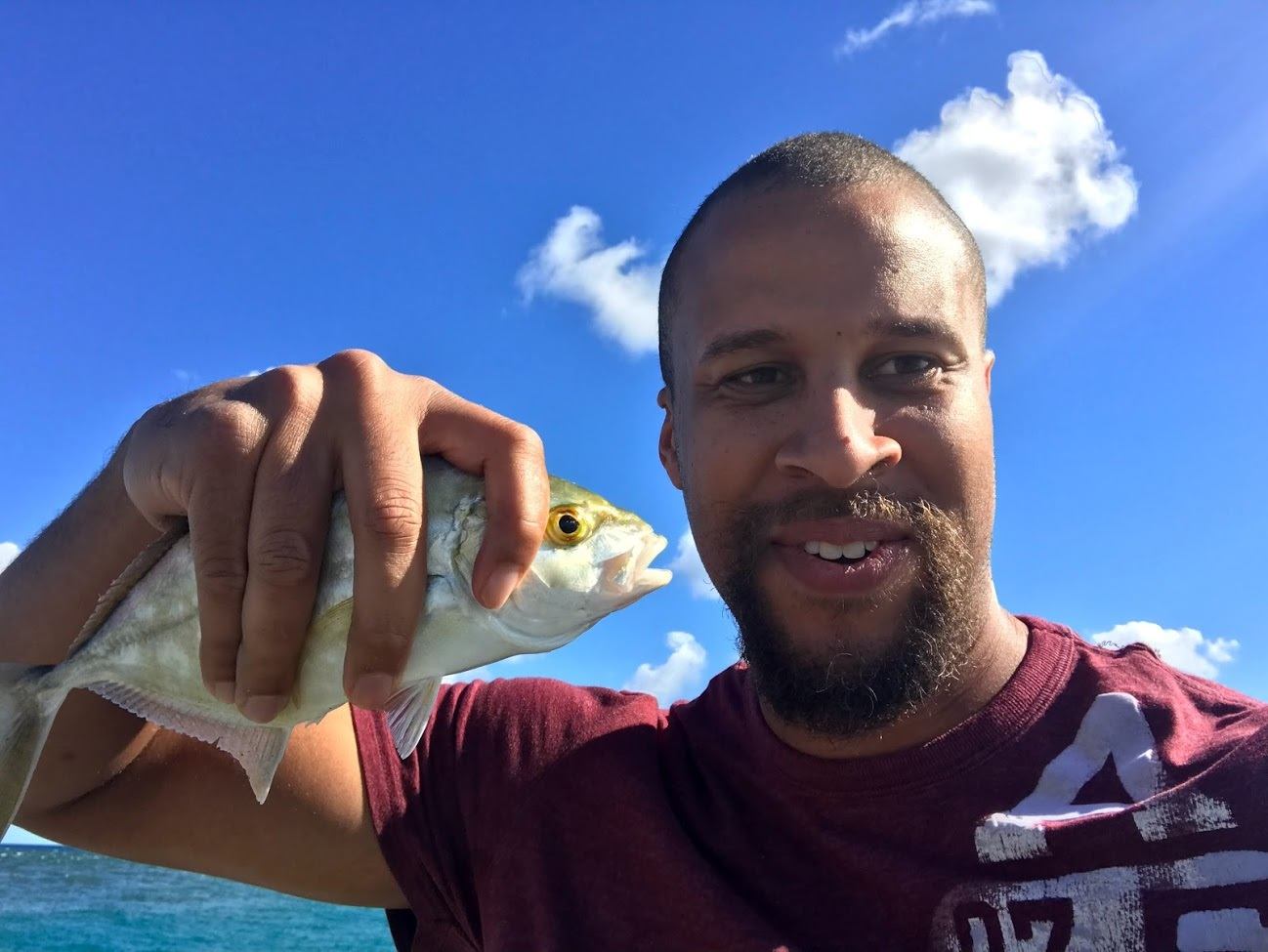 I setup my fishing gear in rocky shore line right where the water kind of slows down. I was like okay, we're slowing down here.

I obviously can't make my lure work on this Inlet side. The rocks are crazy but my baits moving way too fast, missing fish going on the rocks. I'm like, damn! Why can't I get the bite.

I'm just making it a fishing vacation and you can do that too. So I decided to move after that. But I had to move the whole car because everybody in my family was right here on the beach.

The main park area is more for swimming and not fishing. You will see a barrier island out in the water that is made of very abrasive rock and barnacles... don't fall here.

I recommend not fishing there because the water is too fast. So to do that you have to drive backward to a Beach Road and go up the side of the water to this very tight road. This is the ocean side of the park.

Where Fishermen Wait For The Tide To Roll In / Out

If you go there pretty much any given day you'll see people parked in big trucks. they have rod racks all over all over the trucks.

You'll see regular old full size midsize cars. These are mostly old guys that are on lunch break or retired. They'll have six or seven rods in the back.

I'm like what are you waiting for? Several of them will talk to you to see what's going on out there. Since they're obviously waiting for something... the tides, mackerel or people who know the fish are biting.

So I was going back and forth and some guy asked me a question. Hey, how's fishing out there? I told him the water was moving to fast and my hook was too big for the small fish.

later I found out and I saw the problem and then I started hooking a lot of fish which turned out to be grunts... lots and lots of grunts.

Several of them were actually retirees and in there early to mid 60s. One of them said, "I come here every morning, every lunch, and every evening". That's a pretty fantastic life!

I don't know why he was sitting there waiting for the tide to happen. He didn't want to sit up there and burn in the sun or get tan. When the tides just right he knows what the time is. he looks at his watch and takes a nap.

he wakes up just in time for the tide to switch. He walks in there and he's able to present his fishing bait in the right place to the right fish.

He can catch what he wants to catch right here in the inlet, but for the most part that didn't work for me because I had the wrong hook size.

You would think that wouldn't matter so much but it matters a lot on the fish's mouth just isn't big enough and they're very good at stealing things. So let's go a little bit smaller.

the waves were crashing up sometimes even over the wall. it's just that nice right here. you don't see many people many people fishing here. Many are eating lunch, drinking or whatever.

People are not really focusing on fishing. That's cool. I met a couple of people. one guy was a local who actually lived in Palm Springs, which I went the next day.

He told me some great information down there. That actually worked and I started getting some fish. But up here, he said my thought was right. I didn't have the right size up.

Now there's another guy that came up later. he was actually Blacktip shark fishing. he had several large fishing rods. One of them was for catching the bait and the other was for actually catching the shark.

If you're wondering what kind of shark you're catching you right here next to shore it's actually the blacktop shark. During this time from the beginning of January it's actually the national black tip shark migration.

Four or five people that I came across bring it up without me even mention it so it's obviously a big thing. 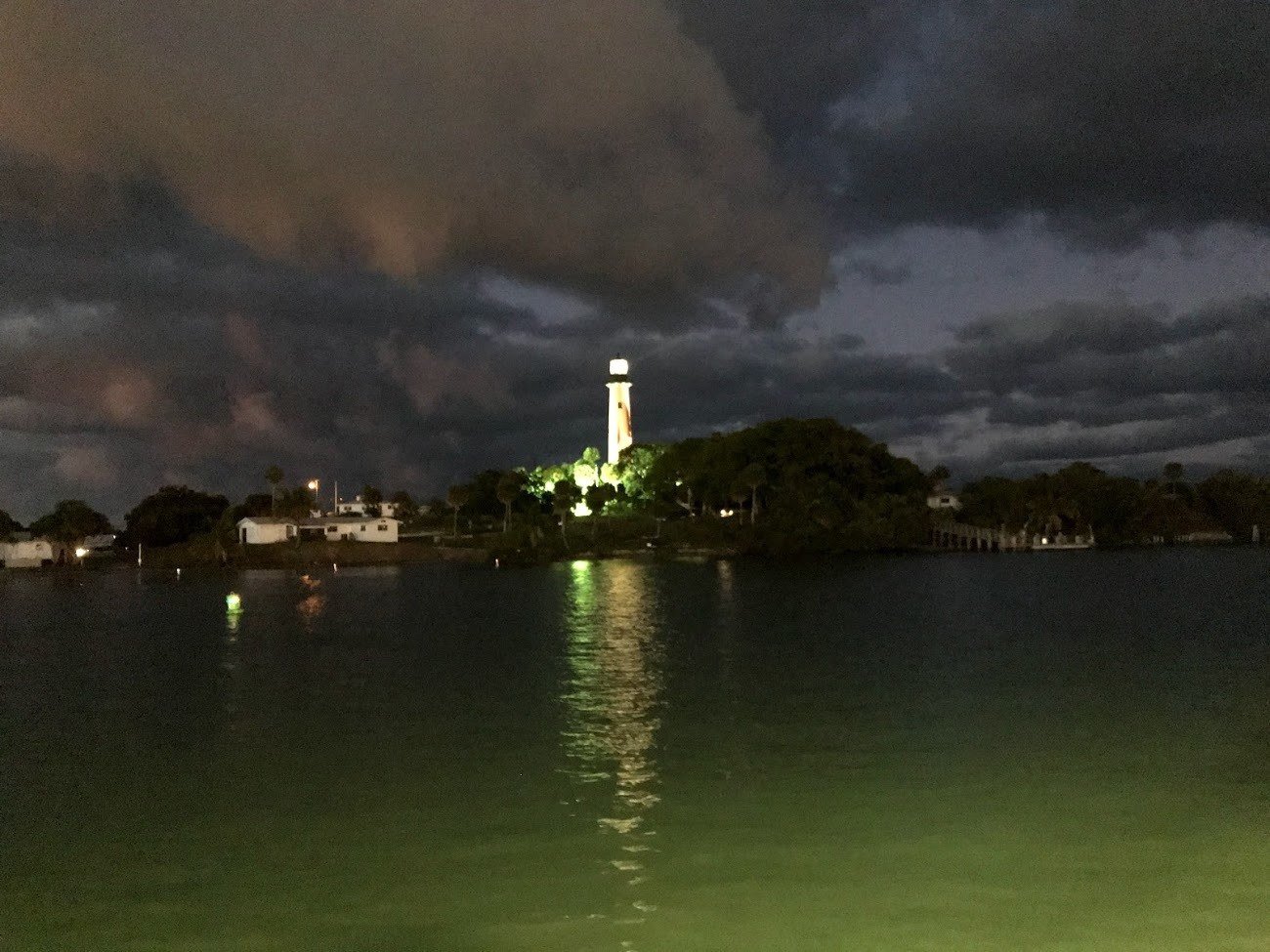 Some people like the locals don't like it because there's blood everywhere near a beach and it kind of encourages those sharks to come closer inland. that could possibly encourage shark bites for people who are trying to enjoy themselves.

Of course, my family was out there at this time so I was thinking about that myself, but the water is clear and you can see anything coming.

I swear every cast out there with a shrimp I got a bite. one or two bites or tugs the shrimp was gone! I'm like how how did they take my shrimp off my hook?

I'm still having a good time. I'm frustrated and don't know what's going on. I'm so frustrated like can't go back to the bait shop right now get you know better gear so I have to try to wing it. 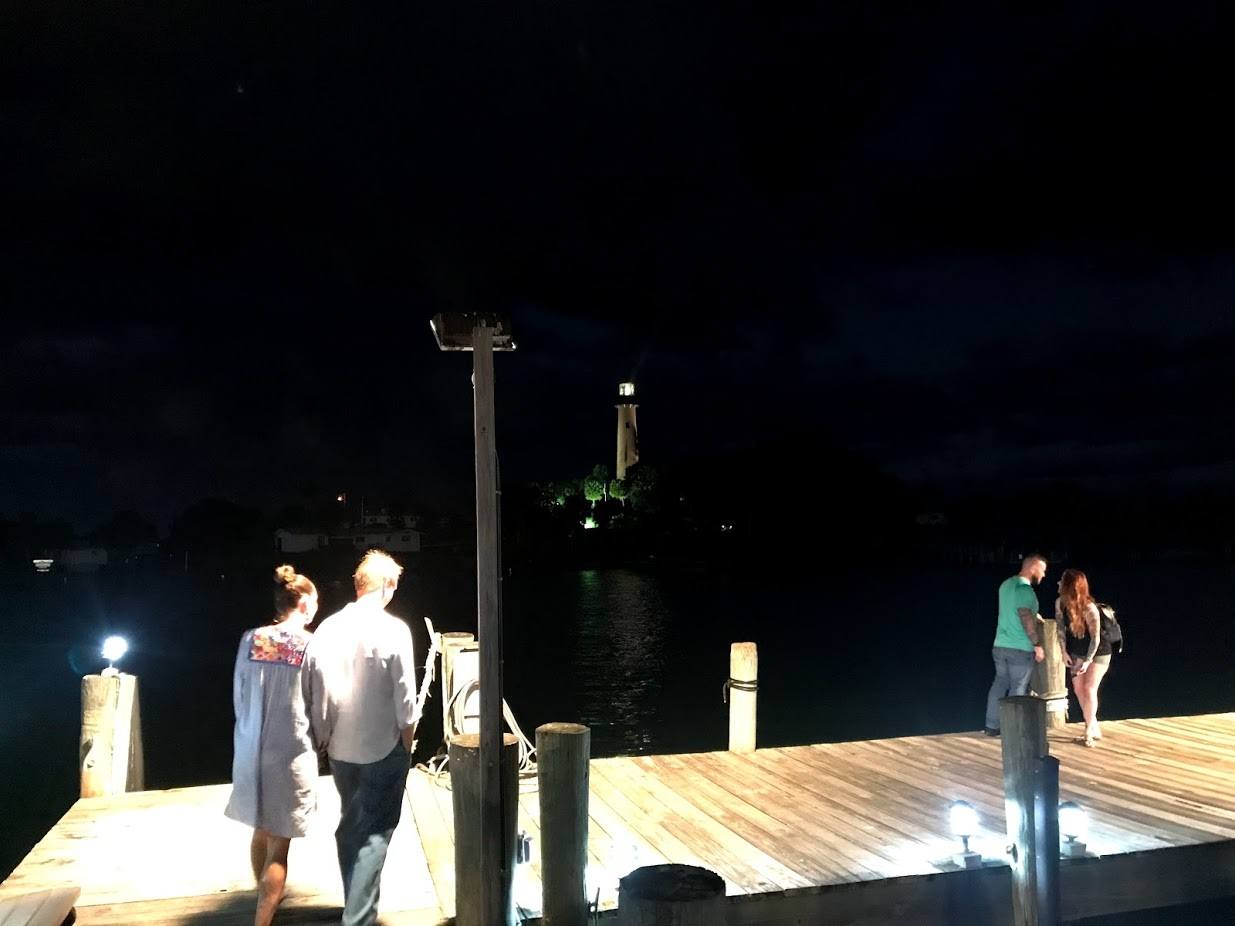 Eventually I do get a good bite and it's a round fish. It got its mouth around the hook, but man I really had to adjust the way I fished. I let them taste a little bit so they can suck it up.

I can get a good bite, but not good enough to swallow. They're literally trying to rip the shrimp right off the hook. They know it's soft because it's a frozen shrimp.

I was told I want to use a fresher more firm and closer to that texture of of squid which is another the bait that isn't that great. It's really good for working in harmony with the strength because it's so tough.

So the next day I found a better way to do it. I put the shrimp on and then I put the squid on top of that and the squid actually holds the ship or longer because but he gives me enough time to feel the fish and hook the fish.

I thought that one little fish is not good enough to eat. I gave it the guy who was shark fishing and he didn't get a bite immediately.

Where To Get Fishing Bait In Jupiter, Florida

When we both weren't looking we heard his spool going out super fast and by the time he got to it the shark was gone.

I did get my bait from Jupiter Bait and Tackle. it's a small little place near the Indian town road. I actually looked at this before I even went to Florida and the reviews were good.

There was a really old guy who worked there. It is really neat and tidy and organized there. inside of there coolers are mullet, herring, squid and all sorts of things.

So he asked me what I'm trying to catch. I told him I want to catch anything that bites. He's like ...Okay, try this. He presented a live bait set with a 2/0 hook, which is great for snook or grouper, but not grunts. 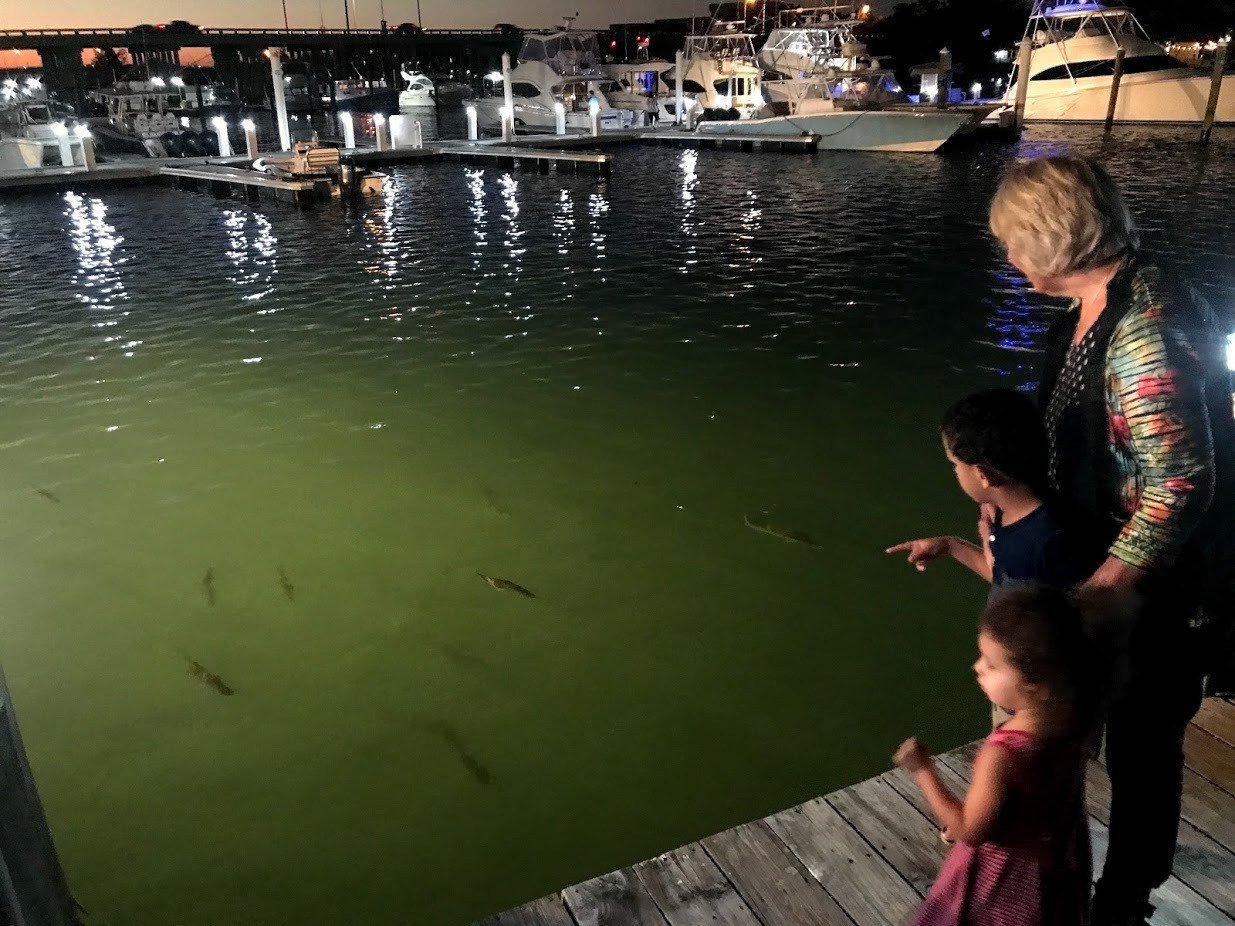 I also bought a Rapala X-Rap. I thought maybe menhaden schools would be hitting the surface of the beach and all kinds of good fish behind that would happen.

So if that happened I would be able to cast my Rapala X-Rap  and give it a quick jerk and catch the fish.

I went to a place called the Jetty's Waterfront Restaurant and it has awesome food! I had the native grouper that is grilled.

Another family had the snapper with some light delicious sauce. it was ridiculously good. I high recommend this place for some good fresh fish dining!

We were able to sit under an awning at the back of the restaurant. This allowed us to see the fishing charter boats and the dock. They had lights on the water and you could see a school of fish just sitting under the light.

We walked over and they happened to be Snook! I have never seen fish school up like this under a dock light next to a ton of people. They were not concerned with us at all. 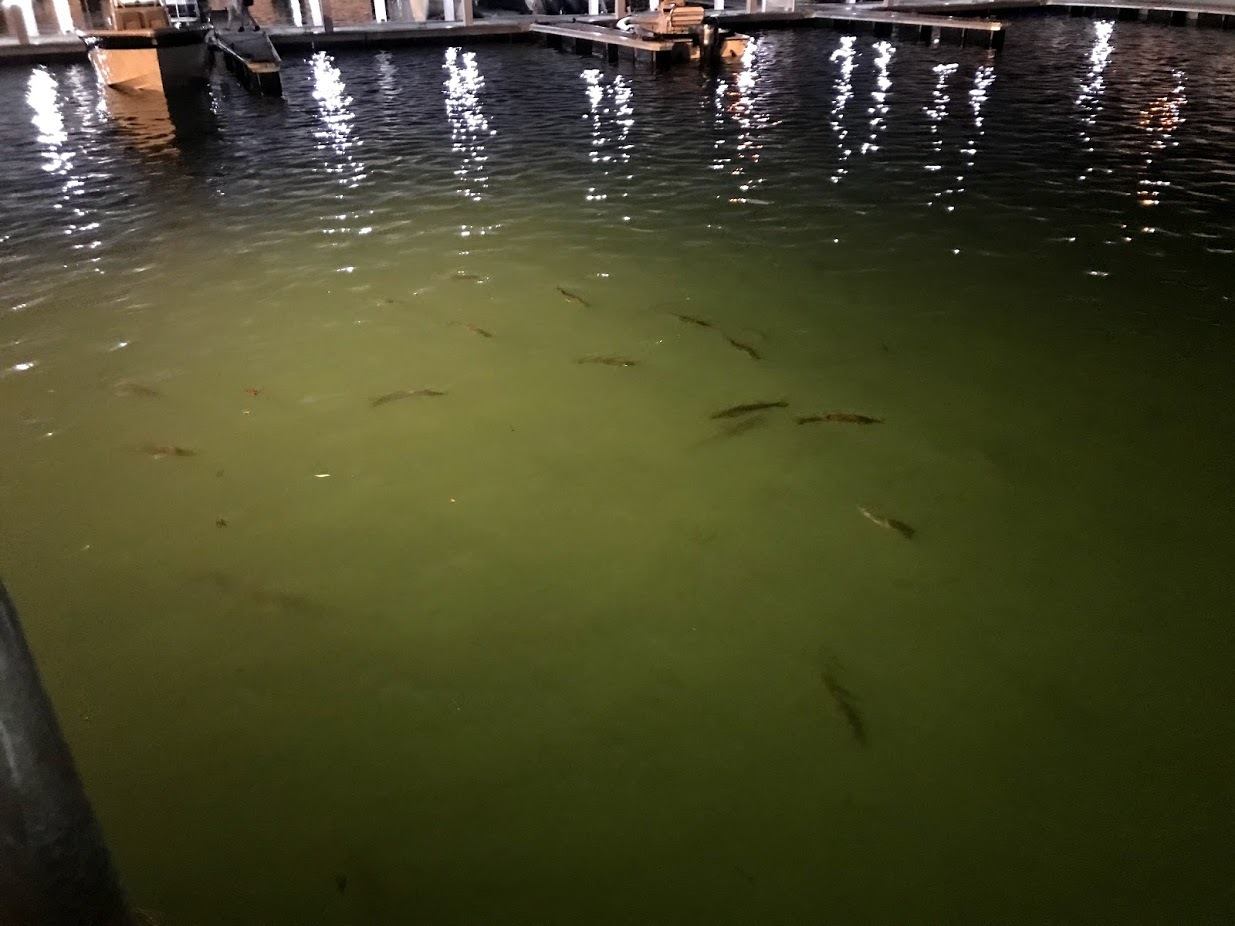 I think that they were eating left over chum that the fishing charters throw overboard once the day is done. However, I don't know this for sure. 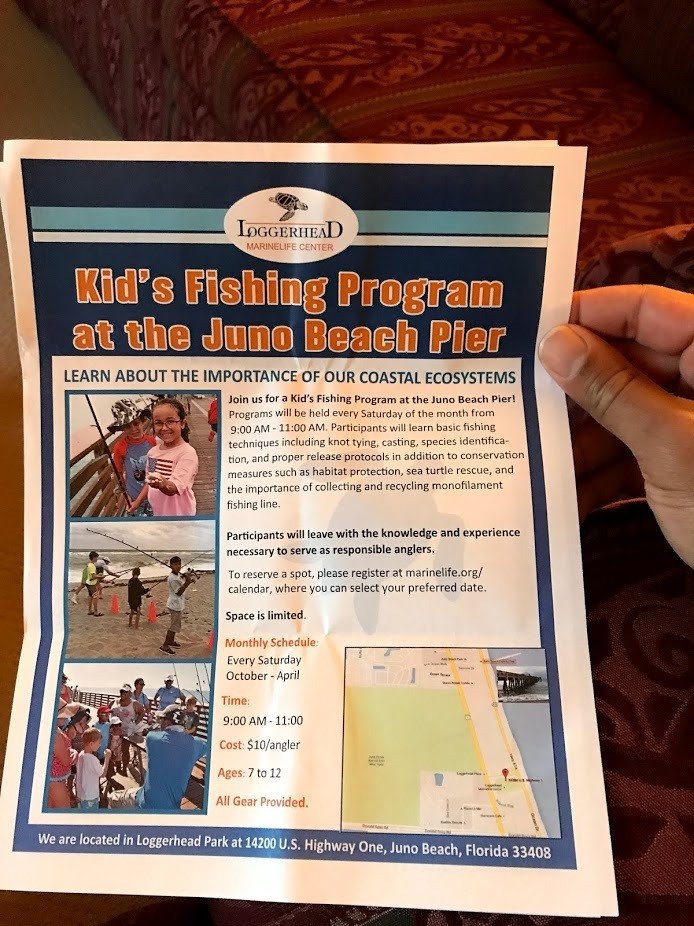 You have to have the right rigs and you have to probably have multiple rods. It really depends on what you're fishing for. 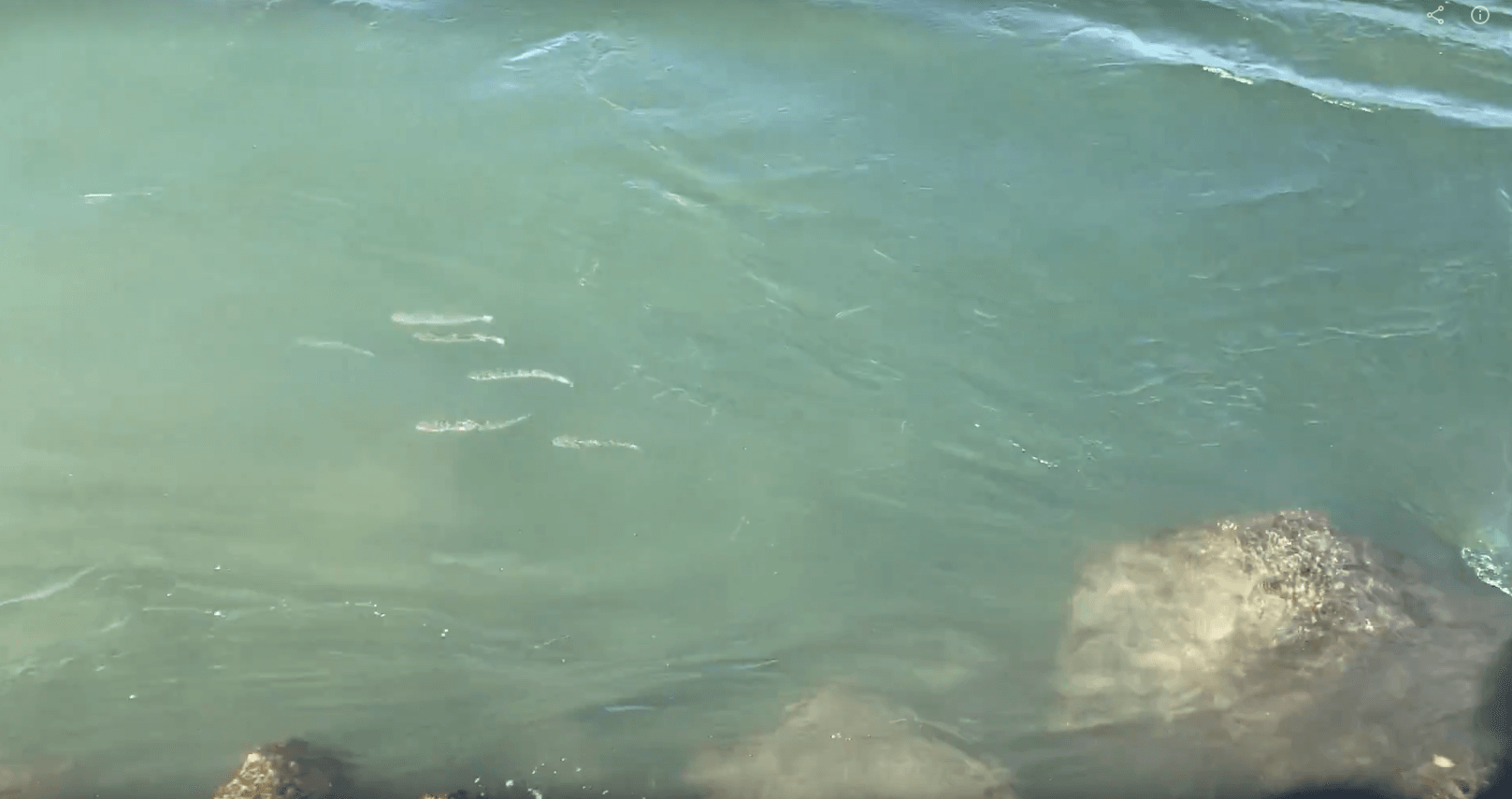 I just wanna help out. I want the fishing industry to thrive and survive because right now we're really at a tipping point. My son likes to fish. I would like him to be able to fish as well and have a healthy environment to go fishing in.

The Charles River where I live is doing better than ever after 30 years being polluted by basically more and more manufacturing.

now it's back and getting better but if you go there on a daily basis you'll see stuff floating that isn't very a kosher.

The river is trying to clean itself. It's doing what it needs to do. That's what mother nature does. I'm Dwight Norris fishingatwork.com telling you to  go fishing on vacation!

Here's a chance to be the one with all of the fishing secrets! Get exclusive articles, insider tips and tricks delivered straight to your inbox by subscribing today. 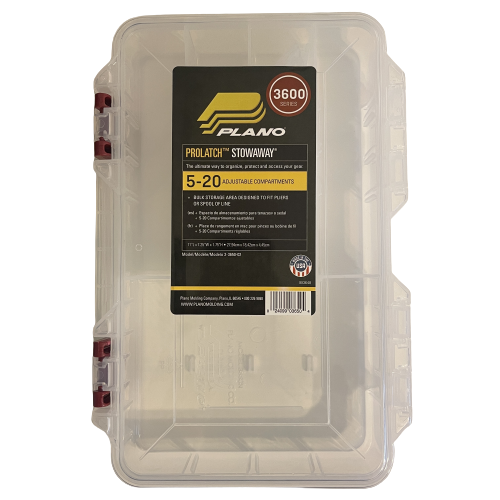