How To Fish Plastic Worms For Bass

Pretty much anybody and their mother know about plastic worms when it comes to bass fishing. You have places like this behind me. Overhanging logs, trees, stumps, deep water, shallow water, pretty much anywhere on your body of water that you go fishing. You can use a plastic worm or a rubber worm, whatever you want to call it.

The reason for this is, back in the day, the 40s, 50s, 60s using a worm was the way to go. The fish knew exactly what to expect from a worm. It would be shallow and come from the shore or fall down somehow.

They're expected to be helpless, expected to be easy, and a certain easy meal. So when they see a worm, oh boy, they're gonna bite it. No problems! They'll slurp it up. Think about it. They'll even take it, grab it, go 20 feet with it, and you'll still catch the fish.

So let's get to the details. One of the main questions you want to ask when you are trying to do plastic worm fishing is what is the best plastic worm for bass fishing.

What Is The Best Plastic Worm For Bass Fishing?

Sometimes you might be using plastic worms in a river and the colors need to change. There are so many things to think about. So what is the best plastic worm for fishing? It's something that looks like the worms in your neighborhood. Now if you do some more research, you'll see that some are short in certain places like in the cold areas of the world.

They're shorter, have thinner worms because of the cold weather most of the time, and some places they are long, huge, fat earthworms. Where I am they have a paddle tail on the end of them. there are some places that have there own variety. 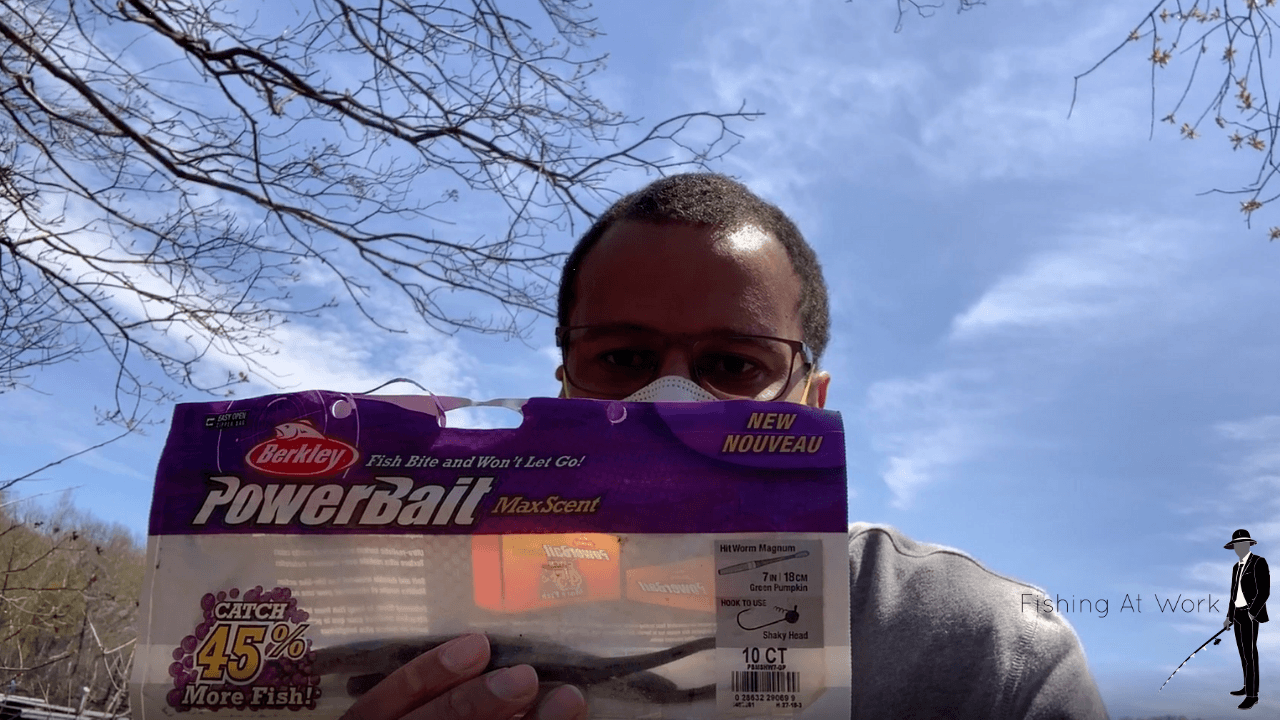 how to fish plastic worms for bass

In some places, there are different colors from green to brown to orange. That's very important. What you also need to think about is what does it look like when it's in the water. because there are shadow play tricks that go on and that's the reason why a black worm works so well. It's also the reason I use it where there are eels.

One of the most popular ones is generally the color of pumpkin seeds or something that's slightly green. The water kind of reflects through the worm and gives that kind of hue. Look at this Berkley Powerbait Maxscent. It has the ribs and the paddle tail, which also simulates the movement of a baitfish.

You can get lost in Bass Pro Shops sometimes I don’t realize how long I have been in there. You get all taken over by the cool shiny stuff that you may not be able to afford. Like oh, look at all the things!

Do Fake Worms Work For Fishing?

Well, obviously, they sell millions of them per year. For more, I'm not sure the exact stats, but it's huge. I buy plenty of worms, you probably bought worms and that means every other fisherman has done the same. I have caught lots of fish with plastic worms when nothing else works.

The whole key component of it is to slow down. I've said it many times that when fish are hanging in deep water or if it is really cold that slowing down can be your make or break technique. It’s slow and it’s boring, but when you get that bass on there that all changes.

If you're talking about imitation worms it’s like imitation crab meat. I haven't tried this fake live bait worm. Why would you do that when you can go down below your garden or ground and dig up a worm or go online? I believe the place I use is . they have all the live bait you could possibly need delivered straight to your door. Even though in the winter, they put a little heat package in there to make sure to stabilize it at the right temperature.

A Texas rig has a bullet weight on top and the worm is hooked with an offset hook. The bullet weight helps it stay upright when it is moving through the water, but this is better done with a shaky head jig. 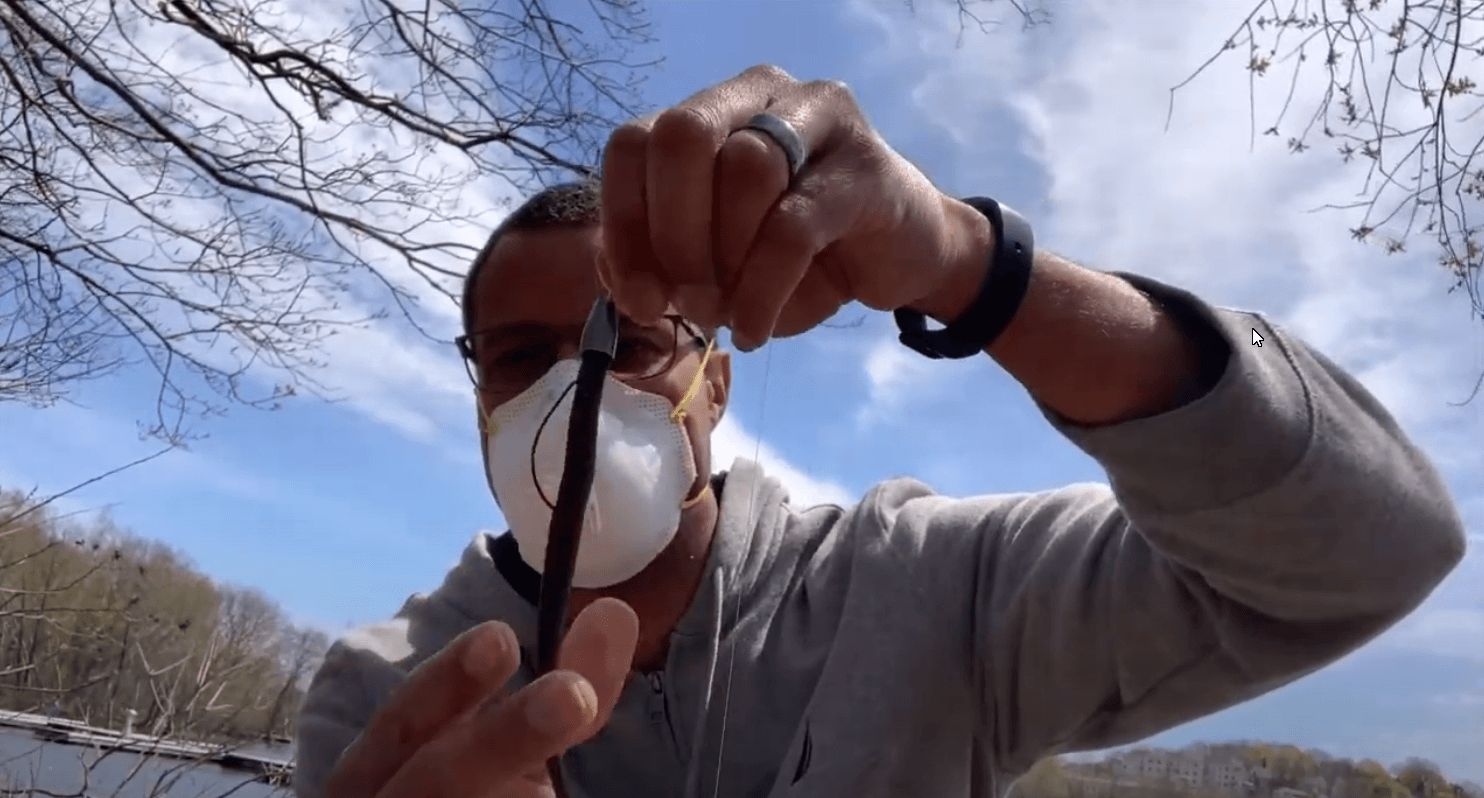 Keeping the tail up in the water column is important so that fish will be able to see it wiggle and shake. This can be done with the shaky head jig, inflating air, or air-filled capsules that you insert in the worm. You simply want to drag it on the bottom and stop so the tail has time to attract attention. Then you move it again.

Hooking it is a simple procedure that is better described in the video above or you can view the photo sequence below. You basically hook it through the top and come out just enough to cover the eye of the hook. Then you rehook it through the middle so the worm is not stretch or too lose. Then you can make it weedless by putting the tip of the hook under the skin of the plastic worm. 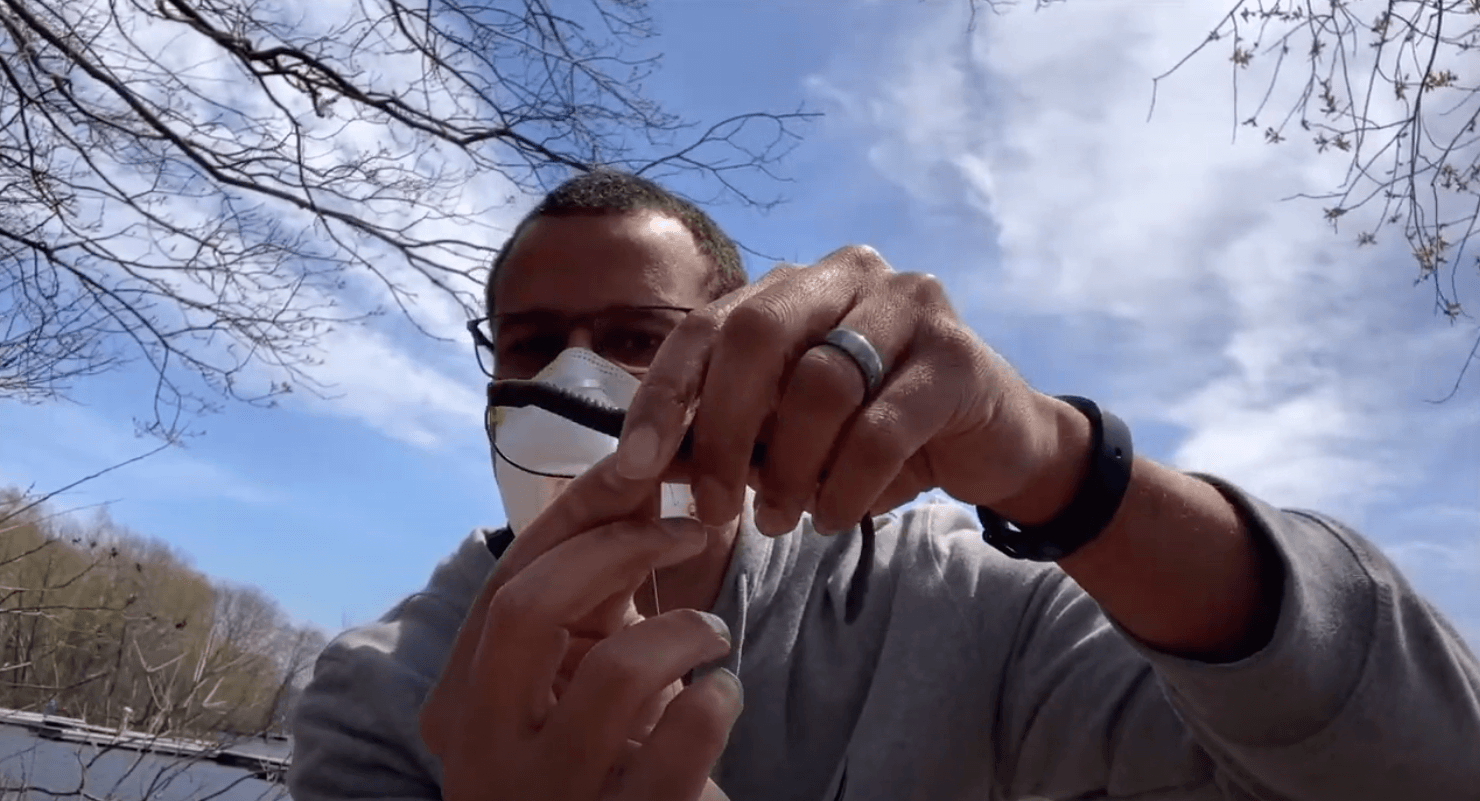 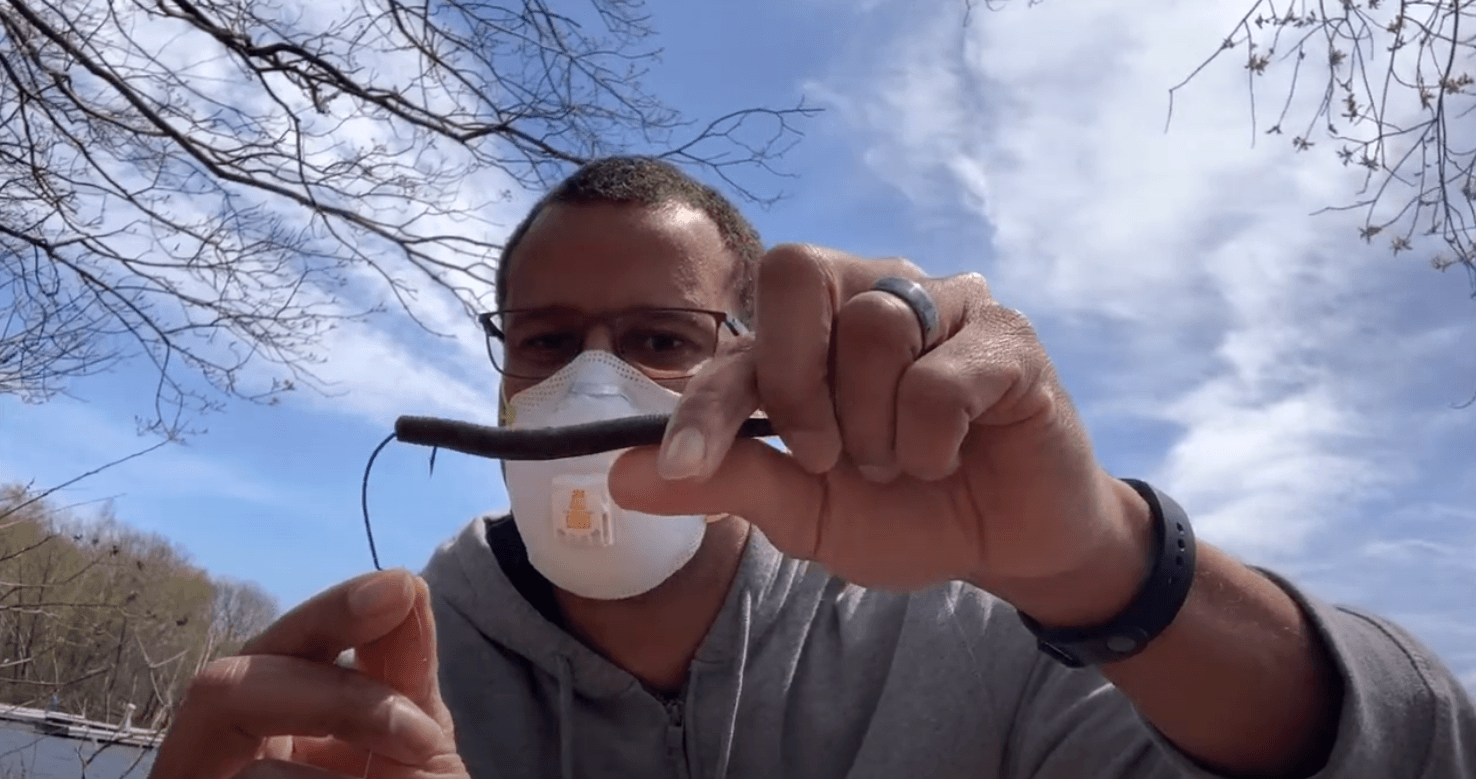 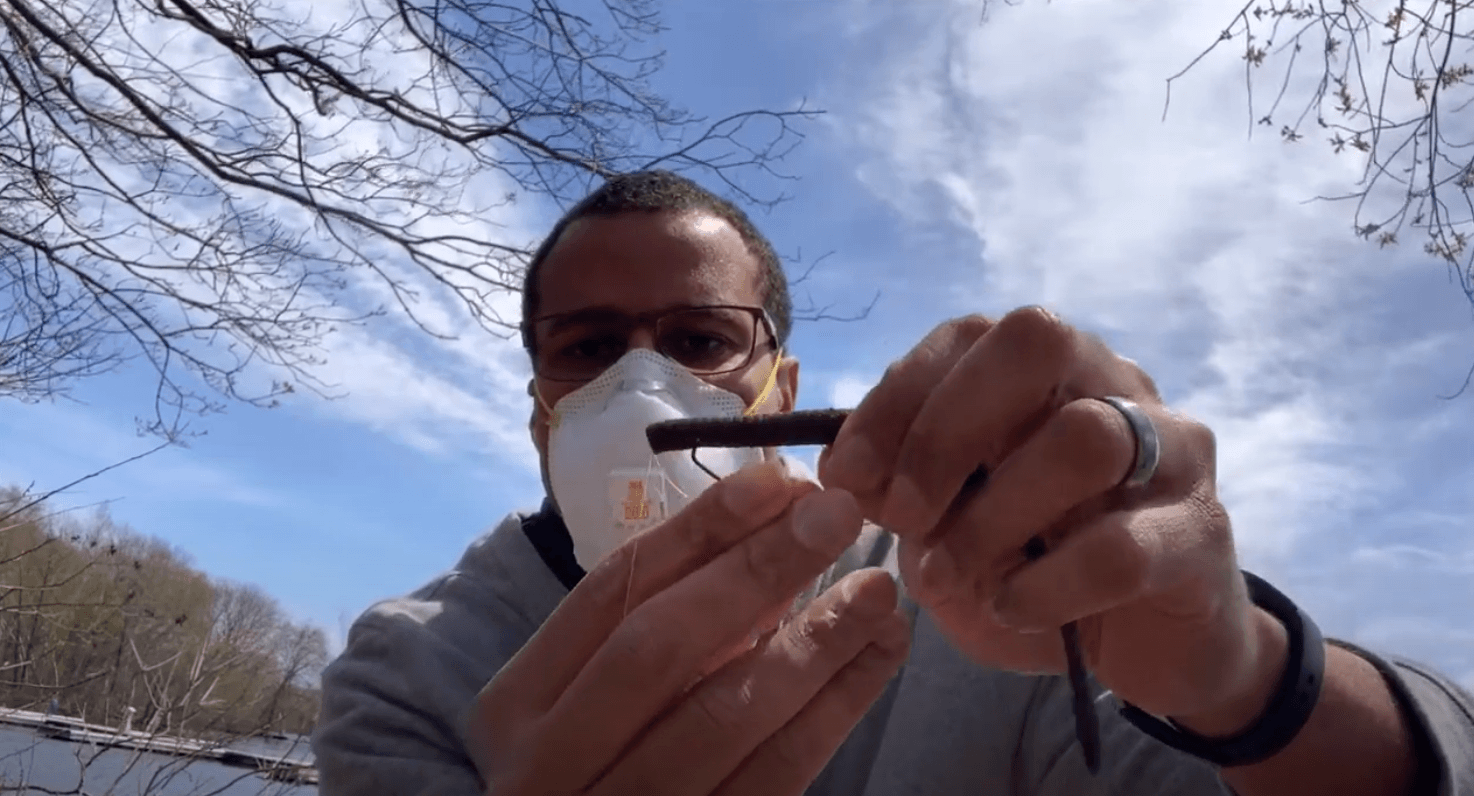 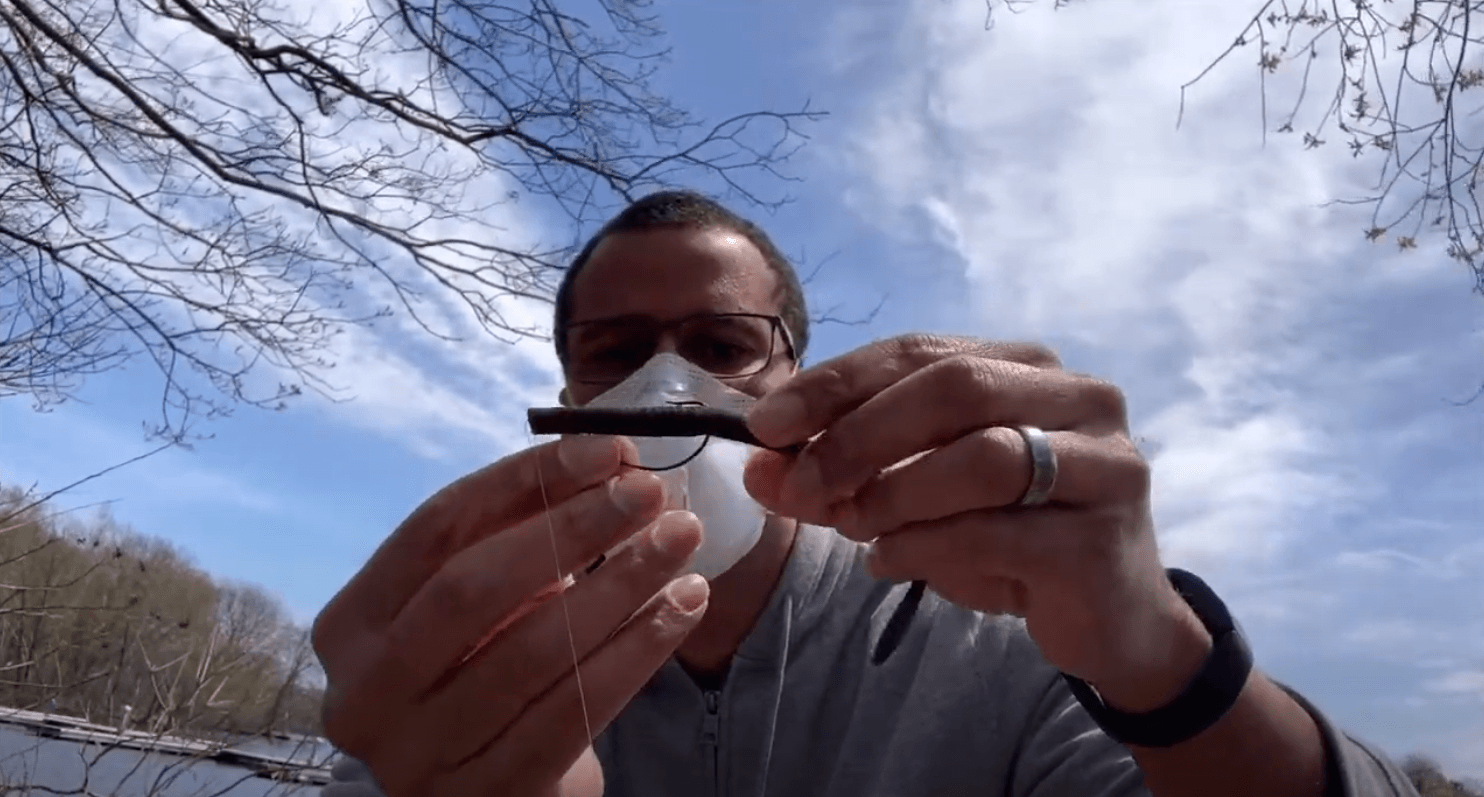 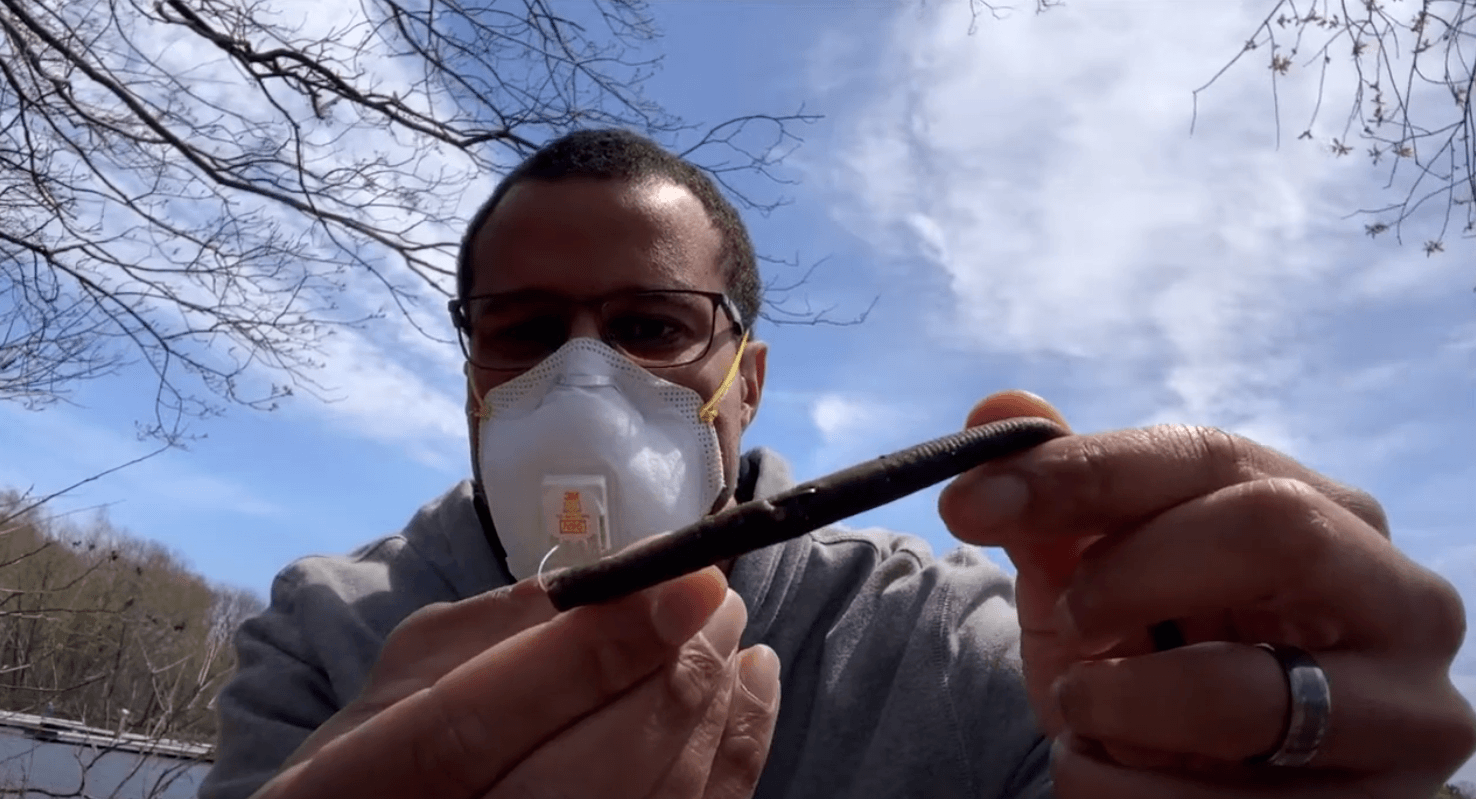 This rig is very popular when you are fishing for suspended bass. It is a relatively simple system. You have an egg sinker (has a hole in the middle of it), swivel and a hook. You start by place the egg sink one the fishing line. Then you add the swivel. You now cut a piece of line that will be 2-4 feet in length. This will be measured depending on the depth the fish are suspended off the bottom. You then attach the link and the hook with a worm and you’re done. 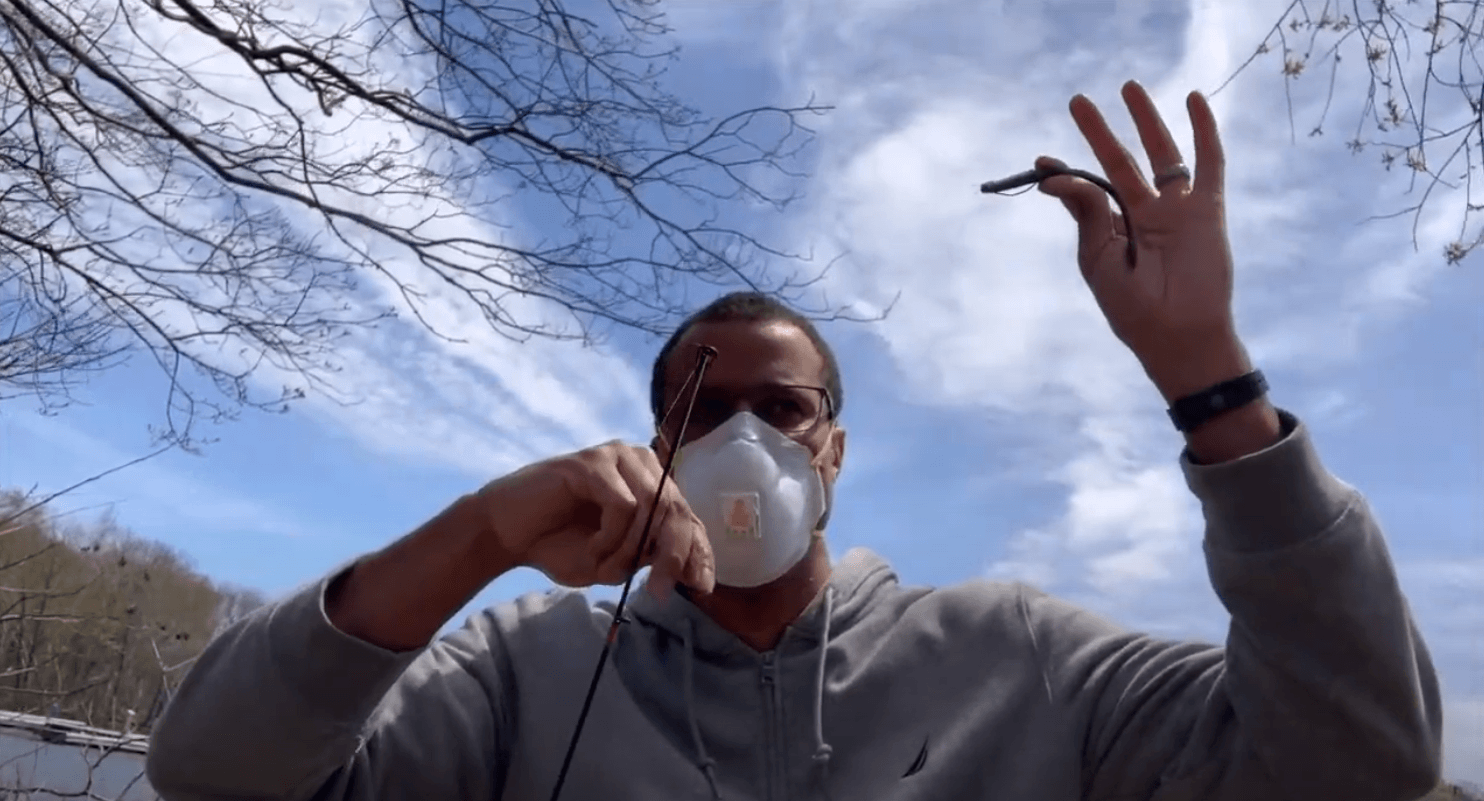 The whole point is to have the worm be constantly presented at the same depth as the fish. Most fish aren’t going to sit on the bottom of the water column most of the time unless they are a catfish. When they are there and you know this rig can be the best thing out there. The egg sinker has to move freely so when you give it some slack it will have an easier time to remain suspended instead of having constant weight on it.

This rig is best known for being used with a Yamagato Senko worm. These works are tube-shaped and half no real features. You could almost use a straw as a mold and make one and other companies and DIYers are doing just that now. However, the effectiveness of these lures cannot be overstated.

These are generally 3-5 inches long and are made to be used on a Z-Man jig head. You can work it however, you want. Shallow, deep it doesn’t matter. It does a fantastic job of simulating a worm or baitfish depending on how you use it. It surprises me all the time.

The wackiness of this rig seems not smart, but the way you work it directly simulates a live worm floating down in the water. Most worms are not going to simulate this very well because of the weights used with them. Those presentations are great for when they reach the bottom or are suspended.

You will find some variations of the simple rigging system for this. The reason you see differences is the fact that you will damage your worm by doing this. You simply hook the worm in the middle and leave the point of the hook exposed. Then you jerk it and twitch it very slowly just below the surface and allow it to fall.

If you don’t like damaging your worms too much then you can use a rubber band around the worm and place the hook on that. The last thing you want is to get a partial bite and the bass takes half your worm, which happens to be the last of that color!

Another variation of the wacky rig is the weightless worm. It is so simple any new fishermen could do it. You simply have a worm and a hook… that’s it! You want to work it the same slow way that you do with a wacky rig.

You want to rely on the natural motion that the worm takes through the water. A real worm is helpless once it lands in the water and can’t do much of anything about it. You have to copy this instead of trying to use it like a snake or an eel. Worms don’t swim.

How Do You Catch A Bass On A Rubber Worm?

To begin you must understand the difference between fishing with a live worm vs a rubber worm. Live bait is simple because you just put it on a hook and present it to the fish. If they like it they bite; if not they don’t bite.

Now when you fish with a rubber worm, you don’t have too many instinctual things to work with.

If you get all of these right you will be catching a bass. Getting them wrong is all too easy. The older a bass gets the smarter and pickier it gets about its meal and how much effort it puts out to get it.

You can buy a lot of these indicators, but a couple is totally dependent on you! The technique is the biggest one because if the rubber worm doesn’t act like a worm… you will not trick the big boys or maybe any of them.

If you use the wrong fish attractant, you may find yourself getting attention, but no bites. I depend on Berkley Power Worms when it comes to rubber worms. They have the ability to keep fish on the line 18x longer because they have the taste and smell down to a science. You can also get fish attractant in a spray bottle.

Can You Use A Bobber With A Fake Worm?

This is a question that I found and I found it interesting. Most people use a bobber with a live worm because the point is to present the bait in front of the fish for as long as possible. If you did this with a rubber worm what would happen.

I can tell you right now if you do this with a Berkley Power Worm the bluegill and pumpkinseed will start biting it immediately. However, they are too small to actually take it. I can only presume that a bass given enough time would try to take it.

I definitely don’t recommend this for normal bass fishing because the bass are normally roamers and you should be searching for them instead of waiting for a bite. Also if it is windy this will definitely be moving way to fast. However, weirder things have been done to find a catch bass over the decades this could be the next big old thing that comes back into style.

I hope this blog post has helped answer your question of how to fish plastic worms for bass. We have a large number of blog posts on our website that is constantly growing. We also have a growing YouTube channel. You should check each one of these out daily to get more valuable content.

If you have any questions please leave us a comment down below or a message using the contact page. Also, try out our quiz on the homepage to see how we can help you go fishing.

How To Hook Frog Lure

How To Hook Frog Lure

Are Telescopic Fishing Rods Any Good

Here's a chance to be the one with all of the fishing secrets! Get exclusive articles, insider tips and tricks delivered straight to your inbox by subscribing today.